Man-to-Man Defense – Force to the sideline and baseline.

Our on-ball defenders force the ball toward the sideline and then down to the baseline. Once at the baseline, we do not allow penetration along the baseline, but try to trap there. Forcing the ball to one side immediately allows you to establish your help-side defense. When the ball is at the top of the key or in the middle, the low defenders must play fairly “straight up” and you must defend the entire court but once the ball goes to the side, our weakside defenders can move into a helpside position and deny the pass into the post, and help prevent dribble-penetration. When the ball is in the corner, we only have to defend one half of the court and can load all five defenders toward that side. With the long skip pass to the other side, there is usually enough time (while the ball is in the air) for the defense to quickly rotate back.

We pressure the point to wing pass. If the ball gets to the wing, we want to deny the pass back out to the point, and force the ball even further into the corner.

Now realize that most often the pass to the low post comes from the wing. And once the ball gets into the low post, most of the time bad things happen… they either score or we foul. So it is very important to 3/4 front the low post as the ball moves to the wing and corner areas. We must deny that pass into the post.

But what about the “over-the-top” lob pass? First of all, this pass is a difficult pass to consistently complete… it is often thrown too high and out-of-bounds. But when this pass is made, the opposite low post defender (in “helpside”) must immediately rotate over to double-team that pass, while the opposite wing defender (who should already be inside the paint in helpside) rotates down to cover the opposite low block.

Force the ball toward the baseline, and focus on the players belly-button. Don’t get your feet crossed unless you have to sprint back. Avoid “reaching-in” and taking a swipe at the ball, as this causes the defender to lose his/her balance and defensive stance and the offensive player can now beat him/her off the dribble. Reaching-in also leads to fouls. Keeping pressure on the outside harasses the offensive player and makes it difficult for him/her to see the floor and his/her teammates.

Man-to-Man Defense – Defensive positioning off the ball – Deny, Helpside, Help and Recover
First, pretend there is an imaginary line up the middle of the court called the “helpside line”. And then also imagine a line drawn from the ball to each offensive player. We like to have our defenders one pass away from the ball in “in the gap” to prevent dribble penetration, playing one or two steps behind “the pass line”. If we want to deny a pass back out from the corner to the wing and from the wing to the point, we play “the line” even tighter to keep the ball stuck on one side.

Man-to-man pressure – Defensive positioning off the ball – Deny, Helpside defense
Defenders whose man is two passes away are in “helpside”, sagging into the lane (paint) area. This helpside positioning almost looks like a zone away from the ball and puts our defenders in a better position to help prevent inside passing and dribble-penetration.

Helpside defenders should never lose sight of their man and should use their peripheral vision to always see the ball and their man. Some coaches call this the “pistols position” pretending that your index fingers are pistols, with one pistol pointing at the ball and the other pointing at your man.

Once the ball gets down in the corner, all helpside defenders should have one foot on the helpside line.

Help and Recover
Help and recover on the perimeter is necessary because when you play tight pressure defense on the ball, there are going to be times when the on-ball defender gets beaten off the dribble. To help stop dribble-penetration, the closest perimeter defender gives help (closes the gap), to deny the dribble move.
When we help and recover, you must move your feet quickly to establish position to prevent the dribble penetration… you must not simply “reach-in” and take a swipe at the ball, move your feet on the flight of the ball and be ready to recover.

We prefer to give up outside jump shots, not lay-ups and free-throws. It’s important to keep guards from penetrating from the top. We want our defender on the point guard to force him to his off-hand. In some cases, we force him away from the stronger, more dominant player on the wing in an effort to keep the ball out of his hands. The point defender must work hard and play defense with his/her feet and stay in front of the offensive player, and not just “reach-in” and swipe at the ball. We also hedge on ball screens to prevent point-guard dribble penetration.

Man-to-Man Defense – Defending cutters.
Another important aspect is to deny the pass to a cutter moving through the lane. Here the defender must try to keep between his man and the ball, denying the pass.

One technique the defender can use is to “bump the cutter” off his/her intended pathway by getting position and riding the cutter away from the basket. Rather, it means getting inside position on the cutter, or at least an arm in front in the passing lane, much like the ¾ fronting of a post player.

The defender tries to beat the cutter to a certain spot on the floor, which really is no different than two players fighting for rebounding position… both are entitled to that spot on the floor, it just depends on who gets there first. So the defender must use good footwork and establish position over the cutter… you cannot simply push or hold the offensive player.
An important point is the concept of “jumping to the ball”. As the ball moves (either pass or dribble), defenders should “jump to the ball”, or move a step or so toward the ball. Not only does this help deny the pass, but also puts the defender in the cutter’s path and the defender has a better chance of bumping and denying the cutter. All defenders should react to just about every movement of the ball.

Man-to-Man Defense – Defending screens
You must have a plan for defending against screens. Of utmost importance is communication between defenders and calling out the screens before they are actually set. Inside post screens should be switched, since you usually do not end up with a size-quickness mis-match.

On outside perimeter screens, you must communicate whether you want to switch these screens, try to fight over them, or slide through (under) them. Switching on the outside could occasionally lead to size and quickness mis-match, especially if a post player steps outside to set a screen for a guard.

Important points on the jump-switch…

1. The three remaining defenders must be ready to give help to “absorb the roller” if the screener rolls off the pick or slips the screen and gets the pass over the top.

2. The defender guarding the sceener must jump out, stop and contain the dribbler.

Outside Lateral Screens
It is easy to switch these screens and usually a mis-match does not occur. Since our wing defender is in helpside, there really is no-one to screen. It becomes more of an exchange. When they do attempt to screen, we switch.

Man-to-Man Defense – “Red” — Aggressively Trapping the Point Guard
On occasion, as a surprise tactic, you can try an aggressive trap on the point guard… We use this as a surprise tactic, maybe after a time-out, or a made free-throw.  Also, this can be a late game tactic, when you are behind and need a steal…

We advocate the BEEF method, which establishes a solid foundation for building an accurate jump shot.

The four fundamentals of how to shoot a basketball, which will allow you to be consistent every time the ball leaves your hand.

A solid base gives your jump shot great balance from start to finish as you start your shooting motion.

Maintaining great balance throughout your shot requires two things: positioning your feet about shoulder-width apart and firmly under your shoulders (if your feet are staggered or narrow, you can be off balance); and pointing your torso and head toward the basket throughout your shot (meaning your body is pointed in a straight line toward the target, so you can direct the ball toward your target instead of off to the side).

If the upper part of your arm can form a 90-degree angle with your torso, it will help you shoot in a straight line toward the rim. This technique gives you a consistent shooting pocket, so you can release the ball from the same position each and every time. A common mistake poor shooters make is jutting their elbow out to the side (flying elbow) of their body, giving the ball unwanted sidespin or an unpredictable flight path.

3. Eyes on the target

Before you release the basketball, it is critical to direct your gaze toward the back of the rim. Your focus should be locked in on your target before you even start getting into your shot.

Your eyes are your body’s navigation system. Once you start your shot, your eyes tell the rest of your body where you want the ball to go. This becomes even more crucial when you are shooting off screens or shooting while moving.

Another thing to remember: don’t follow the flight of the ball as you release it into the air. This takes your focus off the rim and makes you less accurate. Focus on the rim!

Following through and flicking your wrist is the last piece of the shooting motion, and it’s a crucial component when learning how to shoot a basketball. When you release the ball, your wrist should flick toward the target as if you were reaching on top of a high shelf to grab a cookie out of a jar.

When you follow through properly, the ball should roll off your tips of your pointer finger and middle finger, which will produce good backspin on the ball. The backspin is very important because it will slow the ball down as it hits the rim and allow the ball to take a ‘friendly bounce’ which is referred to as the ‘shooters touch’. You will know you have done it correctly if your wrist is flexed to the point where your fingers point down toward the ground. 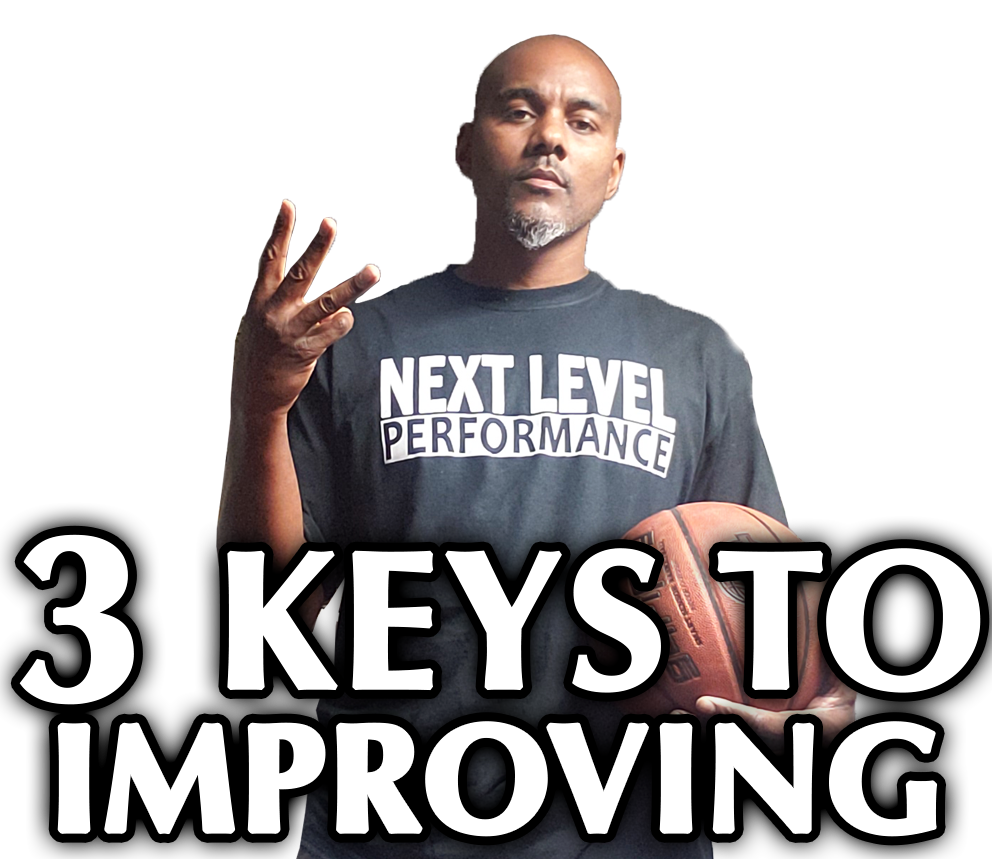 BASKETBALL IS TOUGH! Here's 3 tips to reach the NEXT LEVEL!
We respect your privacy. Your information is safe and will never be shared.