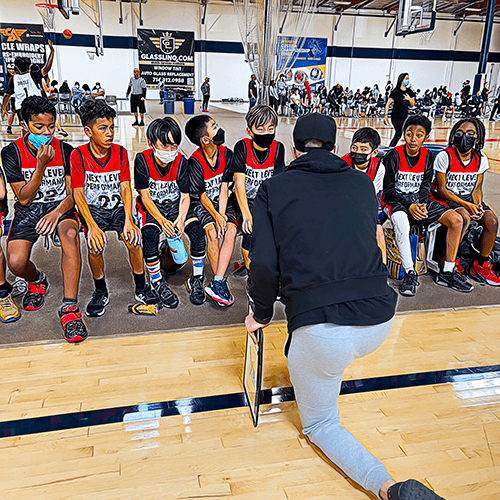 The 11u Brown team struggled on Saturday. They went 0-2 but fought hard throughout the games. On Sunday, they stepped up winning 2 elimination games before losing in the championship by 6 points. They did a great job bouncing back and brought home a second place trophy.

Stick with it and we'll keep getting better. It might help to sit and watch some of our other team's games that are having success. All of our teams run the same stuff so you could learn a lot from those games.

The 12u Yellow team played great on Saturday. Won both games pretty comfortably. On Sunday, they won a hard fought game to make it to the championship. In the championship, they lost by 4 due to lack of communication. We spoke after the game and most of the players agreed that we could do a better job communicating and getting matched up on defense. Overall the team played well and came home with a second place trophy.

The 13u white team played solid on Saturday despite missing Cayden, T2 and Shane. They made it to the championship game and lost by 10 points to a team that we had beaten by 12 points on Saturday. The other team caught fire and knocked down multiple 3's. We could have done a better job defensively. Our effort was questionable at times and we missed at least 15 lay ups throughout the game. They came home with a second place trophy but that's not bad considering 3 starts were missing. T1 played amazing, better than he's played in over a year, rebounding, finishing, driving to the basket, he did it all. Hopefully he can keep it up.

The 14u black team played great all weekend. Kinsey definitely played his best games. We were short-handed and little 11 year old Q had to step in to play PG for the team on Saturday and did a great job. Even Devin Devin from the 13u team played and made a couple of big plays. On Sunday, they were down almost 20 points before coming back to win a close game. The players were really excited before the administrator said we were disqualified because some of our players were playing in 2 different divisions which is a new rule they are enforcing. It was disappointing however, since we were shorthanded, we would've lost or forfeited without the extra players anyways. The players did really well and will hopefully keep building off that success.

The 14u Blue took care of business on Saturday. I thought everyone stepped up and contributed. Shailen hit a bigtime game winning shot in the first game. In the second game, we were able to pressure hawk hoops and force a ton of turnovers. They hit a desperation 3 to send it to overtime and we won. On Sunday, our defense was too much for the 1st two teams we faced. In the championship game we lost by 4 points. We did not do a great job of rotating on defense. The other team knocked down a ton of 3 pointers and we still had an opportuinty to go up in the last 30 seconds but missed the lay up. Either way, the team played well all weekend and I think we got a little better.